I was on the lam. I was tired of people. I wanted to be alone with weeds and the dead, so I went to the river. My long-dead uncle, my first botanical and etymological mentor, strolled at my side. My recently dead psychoanalyst strayed somewhere behind, enjoying the wombs and phalloi of early spring. Glenn Gould was somewhere in the pathside thicket. I could hear him humming. He had borrowed my gloves and my hands were cold. 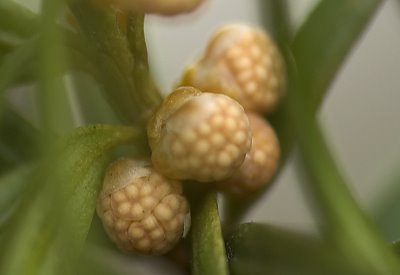 My uncle, an autodidact, was a photographer by avocation and a photoengraver by trade. Decades of photons bouncing off my uncle had engraved traces in my brain in countless layers and masks. It was the ultimate in lossy compression. That's why ghosts are translucent.

"White oak," he said, pointing up, and then he asked me about film.

He pronounced it "fillum," his old joke.

He'd died before the heyday of digicams. His ghost, contextless, looked baffled. I photoshopped in some pixels.

"Very nice," he said, admiring the little machine. He looked into the viewfinder, focused and motioned for me to enter the frame. My uncle believed that all photographs should contain a person. I declined.

"Camera," he explained, "is from the Latin for vault. As in I am lying in camera. There are light rooms and dark rooms. Rooms with and without doors. Do you understand ?"

My uncle handed the camera back and wafted off toward the river. 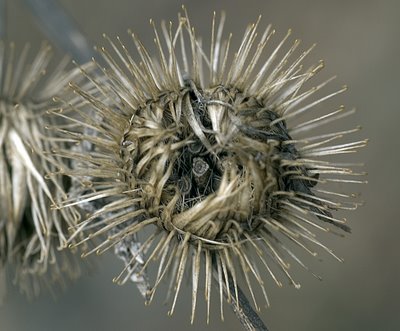 I stood by the path and listened to the birdsong. Two women walking terriers passed by. One, seeing my camera, told me there were cardinals ahead. I thanked her. I would watch for cardinals.

Hummed bits of the Goldbergs drifted from the rosa multiflora. I watched Glenn detach his scarf from a thorn.

"Like ragtime !" he chortled, and headed down the slope toward the river.

There was a flash of red in some switchgrass. A cardinal ! 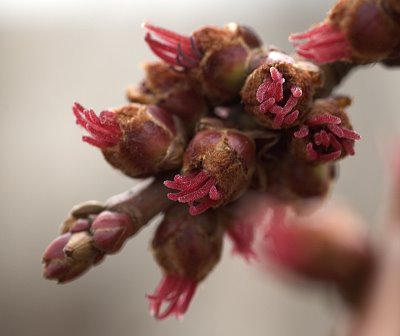 Boston's Cardinal O'Malley, in fact, newly incardinated by Rome and freshly disincarnated by me. Not all ghosts are dead, after all. He wore a red skullcap and his brown Franciscan robe.

"I like your sandals," I said, looking down. They were leather. Hand-made, I'd read in the Globe. "Aren't your feet cold ?"

He sighed. He seemed sad. I thought of his vows. Poverty. Chastity.

I sat beside O'Malley on a rock. He leaned his ear toward me. Apparantly I was supposed to confess. 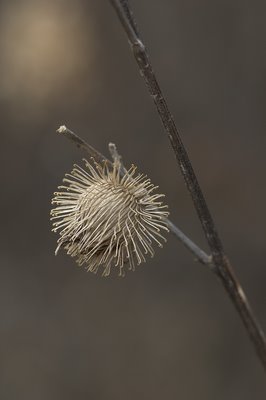 I lowered my head. I tried to remember the unfamiliar Catholic words. "Bless me, Father, for I have sinned. It has been an infinite number of days since my last confession."

It was then that I spotted Dr. M. sitting in a patch of old milkweed. He was taking notes. He ran one fingerdown the orange central rib of one empty pod, then scribbled in his steno pad. At last he looked up.

Confused, I turned back to O'Malley. "Does this have anything to do with my The King Is Dead dream, the one I had in 1978 ? And why are you wearing that robe ? Empty pod or Patriarch, what shall it be ? I have desired both. I have even interpreted dreams !" 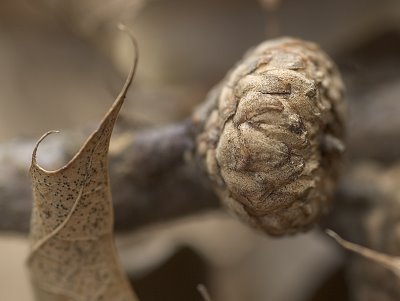 Before I could receive my penance, there was a thudding of wings in the tree above us. It scared away all the ghosts, living and dead. I looked up. It was a hawk. I looked at the hawk and the hawk looked back.

Photons shuttled back and forth. Ions crossed membranes. Proteins twitched. It was a fair exchange. 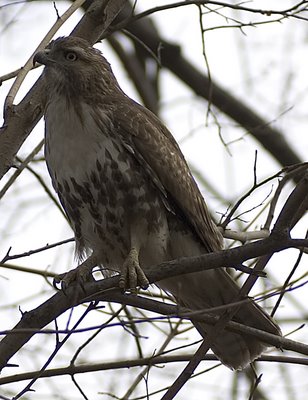 The day was cloudy, but not too cold. The ground, in fact, was warm. The sun peeked through once or twice. I peeked back. I was neither happy nor sad. There was a lot to see. It was all interesting. 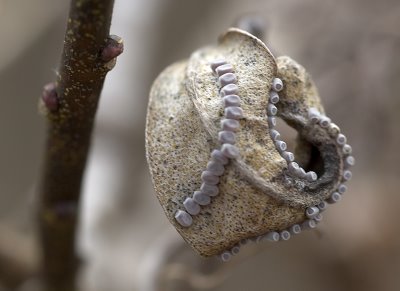 Don't ever forget strange.
Posted by Paula at Friday, March 24, 2006 No comments: 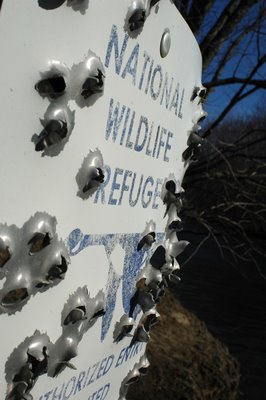 There is no refuge, I decided on last Saturday's walk. Hunting's allowed in the federal wildlife sanctuaries now, and, from the military base across the river, came the sound of loud, long fusillades of gunfire punctuated by an amplified, booming, garbled male voice. Target practice, probably. Young people learning the craft of war. How to kill, and, by unspoken extension, how to die. The voice, authoritarian as a father's, floated across the pretty, brown river and followed me as I made my way along the path. 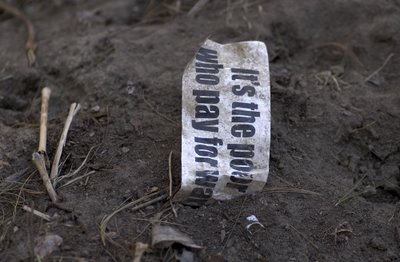 War, corrupt, benighted rulers, greed, poverty, the corporate commodification of basic human necessities, ignorance, apathy, rampant superstition, intolerance, violence in the name of religion -- none of this was new, of course. The world had been this way for my whole lifetime, and, indeed, from the beginning of history. But I was tired of being appalled. There had seemed to be a particularly ugly confluence of awfulness lately. I was tired of finding myself screaming profanities at the radio everytime I heard the president's voice, of trying to drown out the wheedling, faux-Texan twang and the empty, insipid, platitude-and-malaprop-ridden, lie-filled rhetoric.

And now the Bush song had followed me into the woods. Cantata for Gutteral, Incoherent, Amplified Voice and Gunfire. Great. At least the slaughtering refuge hadn't yet become the Pepsi-Cola Federal Wild Game Hunting And Soft Drink Sanctuary. That was, I suppose, something. File under atrocity-yet-to-come. 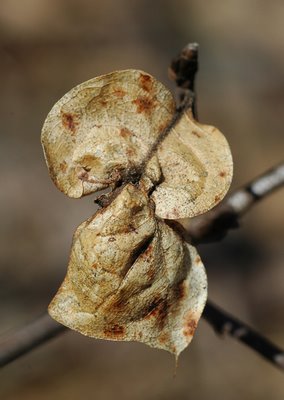 The winter, though, was ending. That should count for something, right ? Lilacs out of dead land ? I had always found something unsettling about spring. The swollen-to-bursting buds, the burgeoning green, the incipient heat. Joggers, sunbathers, vacationers swarming outdoors in hale, backslapping, bike riding, rollerblading, Gatorade-swilling droves. 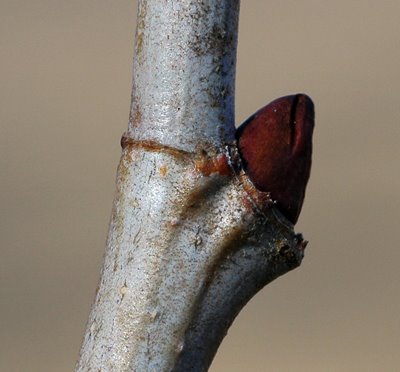 It was almost obscene. 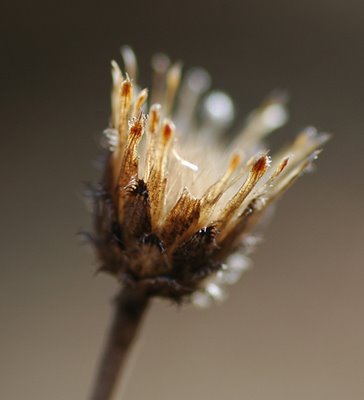 Soon I'd have to say farewell to the gold and brown, light-filled chalices of late winter. To the silhouettes of winter trees against sunset, branches ramifying like lead through stained glass. Soon I'd have to fake smiles of agreement when assaulted with the inevitable 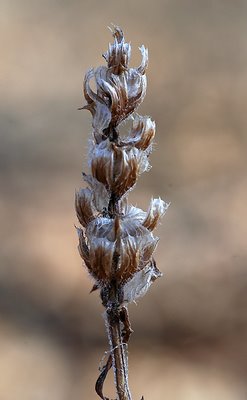 Is this dread that Persephone feels each year when it comes time to leave Dis and rejoin the living ? 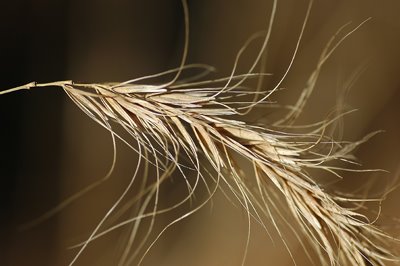 I leaned over the sheer, sandy bank of the river. Even the water seemed golden, shot through with vague shafts of sunlight. I looked closely. Spring had already arrived here. Strange little nymphs were paddling about underwater. I skidded down the soft, crumbling sand and watched them for awhile. There was something, well, happy about them. 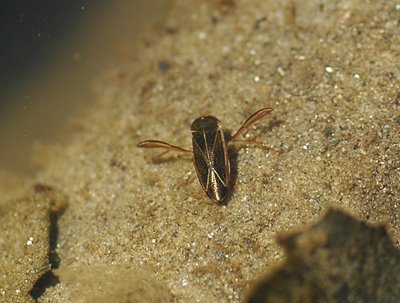 As I scrambled up the bank, eyes inches from the ground, I noticed a small, black hole. I braced my boot against a root and stopped to examine it. A cold wind and dead smell tickled my nose. I sniffed at the heart-shaped gateway formed by the incurved stem-end of a dead leaf. It was a familiar smell. It was the smell of, if not abduction, at least seduction. It was an invitation to an under-underworld.

Come down whispered a familar voice 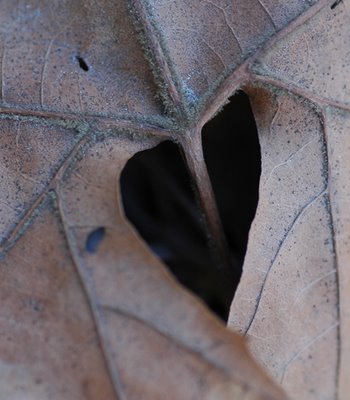 Lent arrives in the dregs of winter. It's a desert time -- threadbare, cold, grayscale and fading sepia. The world, it seems, has become a windswept, abandoned nursery or an ill-curtained window, open onto blank, white air. 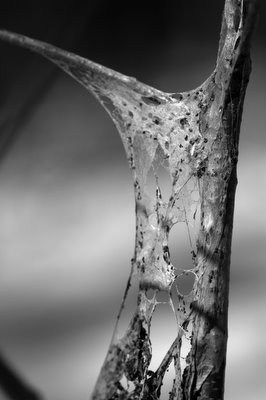 Night falls. Lights streak the windscreen of the bus like blood splatter. 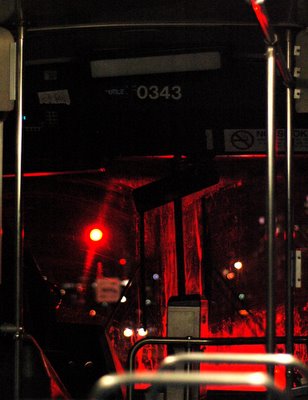 Where is there warmth in this desert ? Where comfort and solace ? There are the usual temptations. Bread. Power. Miracles. I fall asleep thinking of breakfast. I slip into my white coat and intone, "Eat these." I think of death and imagine that something, something ex machina, will arrive at the last moment and bail me out. A redeemer, maybe ? 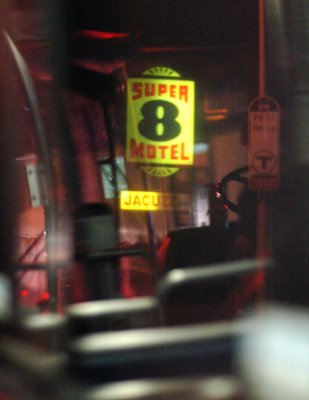 Live without appeal, appealed the philosopher. Endure. Be brave. Resist. 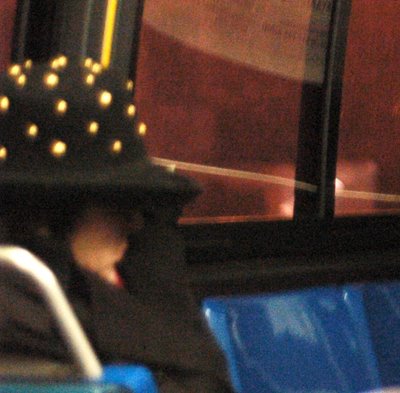 I think, as I often do "X has been dead for 4 years." I posit this against eternity, and feel faint. So little of the sentence served, such an excruciatingly long stretch ahead. But death kills human time, which is as mortal as a brain. It seems like an important teaching that I haven't quite fully grasped. I consider the time before my birth. I feel no dread, no grief. I consider (pressing my mind's exposure/focus lock button) the time after my death. For an instant, no dread, no grief. Then my finger slips. Fearsome darkness swamps the viewfinder. 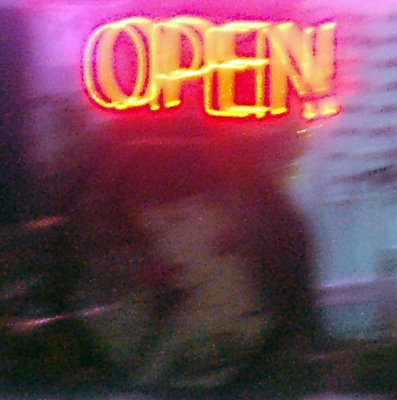 Suddenly I find myself thinking of original sin. On the one hand a distant God, issuing dicta from the distant halls of eternity. On the other hand, corrupt human flesh. 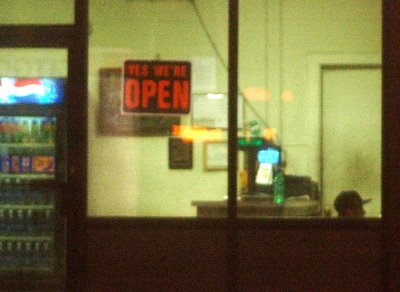 But then I remember the famous twist in the narrative, the switch in the metaphor. God within flesh ? What an immaculate, new concept ! Truly radical ! And with it, all those volumes of thou shalls and thou shalts reduced to two imperatives -- love God, love each other. Which, even further refined, becomes Love.

Yes, yes, I reply, impatiently, Doing's all well and good. 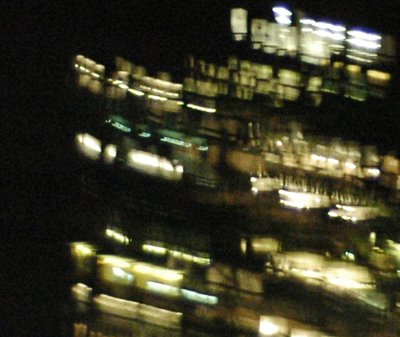 But what about Being ?

(The teacher smiles and shakes his head. Such an obtuse pupil !)

And, as always, the answer seems to flicker just beyond the limits of the blood-smeared, God-infused desert.
Posted by Paula at Wednesday, March 01, 2006 No comments: