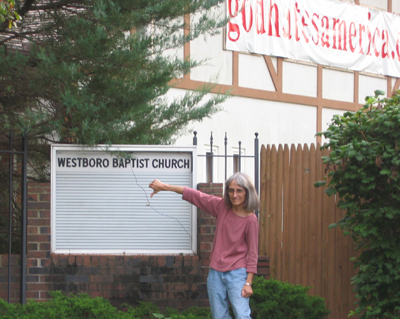 Hatemongering homophobe Rev. Fred Phelps' Westboro Baptist Church is in a quiet suburban neighborhood of old, small houses in Topeka near where my husband grew up. The church itself is a tacky little job, little more than a house gussied up with some stuck-on faux tudor details; his parish, it is said, consists mainly of his extended brood of children and grandchildren with a few others from Topeka's lunatic fringe thrown in to add variety to the inbred, slack-jawed clan of crazy fanatics. Fred's apparantly even a sicker puppy than his bizarre and loathsome public actions would lead one to believe. 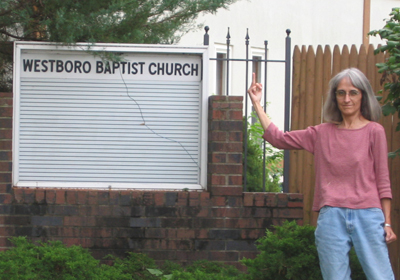 Phelps is infamous for picketing Matthew Shepherd's funeral, but his Topekan picketing goes back decades -- he'd picket a restaurant, for example, on the merest rumor of a gay employee. About 10 years ago my husband and I drove through a Topeka intersection where the Phelps clan, small children and all, were parading about waving their awful signs. Stokey, his parents' large, placid French poodle, was sitting quietly in the back seat, enjoying the ride. Suddenly he reared up and began barking wildly. He'd clearly picked up on some primitive vibe of hate filled menace.Or maybe there was some sulfurous stench that hit his doggy wave-length. We only knew that we were proud of him. Good dog. Very, very good dog. 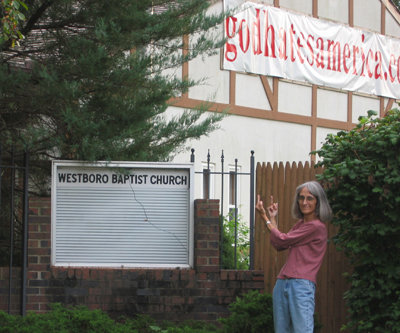 The Westboro Baptist Church, these days, is draped with a huge banner that reads Godhatesamerica.com signifying that Fred's formerly monomaniacal homophobia has taken an unusually psychotic political turn, one that celebrates the deaths of 9-11 and of soldiers in Iraq as a well-deserved consequence of America's tolerance of gays. He's picketing soldiers' funerals now. He's also concluded in a breathtakingly unhinged bit of "reasoning" that last year's 100,000 tsunami deaths also represented an instance of God's anti-gay wrath.

So take that, Fred, you stinky, despicable troll, you pathetic, hatemongering buffoon. If my mother-in-law hadn't been in the car I might have mooned you.
Posted by Paula at Tuesday, August 23, 2005