Then They Were All Run Over By The Atheist Bus 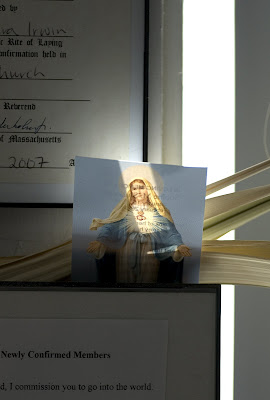 For me, one of the clearest articulation of the religious impulse is contained in a few short sentences at the heart of The Cloud of Unknowing, a manual for contemplation written by an anonymous, 14th century English monastic:

Every man has plenty of cause for sorrow, but he alone understands the deep universal reason for sorrow who experiences that he is. Every other motive pales beside this one. He alone feels authentic sorrow who realizes not only what he is but that he is.

Even as a existentially tormented adolescent, I had an intuition that the anguished question I was hurling into the void -- Why is there something rather than nothing? -- was basically flawed, a byproduct of the way our antecedent-craving brain construes the world. That little why was getting me nowhere. It was a dumb question, maybe the dumbest of all. It took me a long time and a circuitous path to realize that question needed redaction. Chuck that pesky little why and it's sycophantic companion question mark, and you get

There is something rather than nothing.

Now that was something I (and the Cloud's author) could work with. Being.

Hold that thought, and fast forward to another little question.

Do you believe in God ?

Innocent enough, right ? Simple ? Binary, even -- the Ultimate 0,1 situation ? On one level, yes: I recite the Nicene Creed on Sunday and the Apostle's Creed twice daily, both of which begin with a declaration of belief in God. So that makes me, QED, a "person of faith," a proponent of the unprovable "existence" of an unseen entity "God." Me here, God somewhere out there, between us this complicated contract called "belief."

The first response to that question has to be: what do you mean by "believe" and "God."

Here's a heretical thought: all religions are meta-languages -- sets of complicated signs and symbols, each with its own grammar -- with which to discuss, live out, address, experience, communicate and celebrate the irreducible, ineluctable something rather than nothingness of Being, the Ground of which is God. For some of us, chosing to learn and adopt and become fluent in such a meta-language is a response to the existential "authentic sorrow," the primary mystery of being. If that choice is belief, and the Ground of that Being is God, then yes, indeed, I believe in God.

A resolution: Until "Flying Spaghetti Monster" becomes a corollary of Godwin's Law applicable to internet theology discussions, I will steer clear of them. They only annoy me, and, GOK, I do not need any assistance at being annoyed.
Posted by Paula at Saturday, May 09, 2009