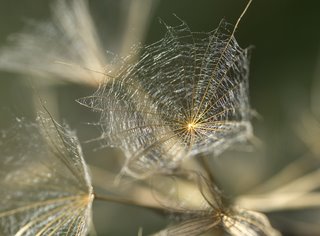 I went to the bird sanctuary on Saturday, early, to avoid the crowds. Long shadows spilled toward the center of the meadow; slanting sun backlit weeds standing motionless in the calm air. It was cold, definately autumnal. I was happy to be nearly alone on the trails. But the day was far from quiet. 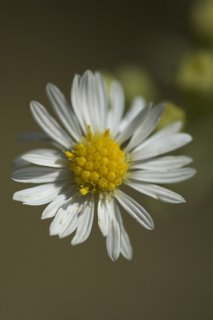 The din of football practice arose from the prep school fields beyond Turtle Pond. Rough male voices in loud unison counted one to ten over and over. It sounded like a military drill. I watched a file of shadows pass through the flat brightness beyond the thickets and the chainlink. Suddenly, overhead, low and loud, came the sound of a jet; I tried to spot it through the canopy of trees. I tracked it with my ears. The sound was intense, hellbent, furious. I thought of Thomas Merton in his hermitage listening to military planes, possibly bearing A-bombs, pass overhead --

There is no clock that can measure the speech of this rain that falls all night on the drowned and lonely forest.

Of course at three-thirty A.M. the SAC plane goes over, red light winking low under the clouds, skimming the wooded summits on the south side of the valley, loaded with strong medicine. Very strong. Strong enough to burn up all these woods and stretch our hours of fun into eternities.

-- "Rain and the Rhinoceros" 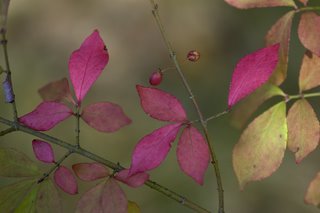 It was true. I'd been on a long quest for something to posit against the world of football games, jet planes, competition, consumption, war and violence. Something perfect as a leaf reddening in the September morning sun. A jogger pounded past on the trail, panting; we smiled at one another. Something perfect as a fellow human enjoying a beautiful Saturday morning in his own way. I was searching for a counterweight to the world's towering edifices of greed, hatred and delusion. 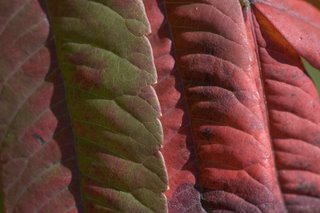 Something like, well, a monastery. A place of light in the world's swamping darkness. A tiny light barely visible through the trees. A light that was carefully nurtured, lovingly protected, and would not go out. Light, like a witness, like an example of what the world could be.

A short poem by GM Hopkins had, of late, been replaying itself in my mind.

I have desired to go
Where springs not fail, 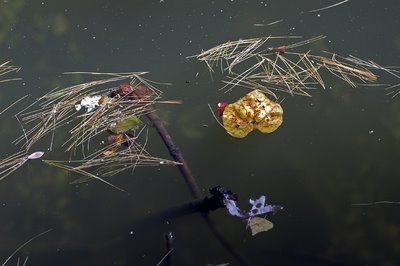 To fields where flies no sharp and sided hail
And a few lilies blow. 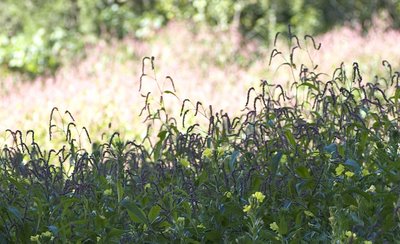 And I have asked to be
Where no storms come, 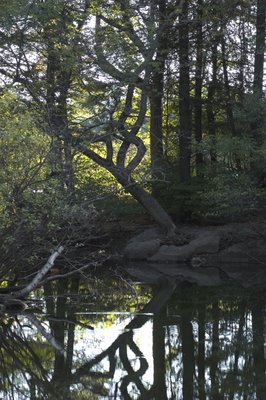 Where the green swell is in the havens dumb,
And out of the swing of the sea. 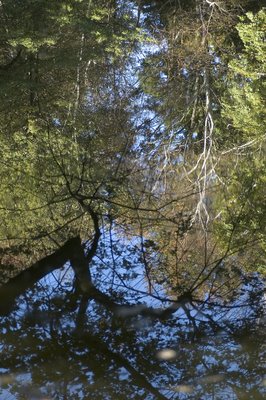 The poem is, of course, "Heaven-Haven: A Nun Takes The Veil." Turtle Pond was a excellent haven, even with the Belmont Hill football team rioting in the background. Then why had I, a few weeks back, lived out my own little I have desired to go... I have asked to be in a book-lined, high-ceilinged office in the beautiful stone church down the road ? How had I gone from outside looking in, to stranger in the back pew, to petitioner: I want to join. I want to be confirmed. ? I tried to explain myself to the young priest. My private, cobbled-together practices were no longer sufficing: a bit of zen, a bit of divine office, a nature walk on Sunday morning. What everyone had said, and what I had resisted to my core, was true: I needed a congregation. Fellow travelers. The priest nodded. Even the hermit Merton, she said, had his roots in the community of the monastery. 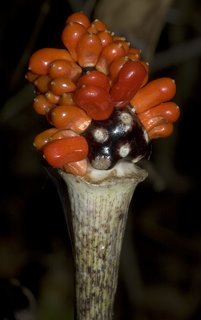 And, after all, Benedict's Rule has this to say about hermits:

The second kind is that of Anchorites, or Hermits, that is, of those who, no longer in the first fervor of their conversion, but taught by long monastic practice and the help of many brethren, have already learned to fight against the devil; and going forth from the rank of their brethren well trained for single combat in the desert, they are able, with the help of God, to cope single-handed without the help of others, against the vices of the flesh and evil thoughts.

This must feel strange to you, the priest continued. Like submitting to authority.

It was exactly that. I felt an enormous relief. As if I'd been forgiven for my great pride and great arrogance. 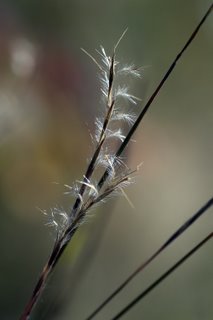 There had been no Damascus Road experience, no blinding light, no thunderbolt realization. If there was conversion it had been of the quiet sort, a slow turning as of a plant toward light. But, unlike a sun-seeking plant, there'd been intent. Or, maybe simply consent -- I had, finally, declined to say no. Which is, of course, (what a strange word for this notorious Bartleby) yes. 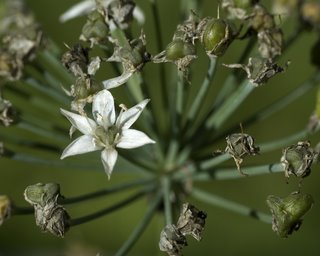 It had been, though, like what Paul had famously written in Corinthians:

I had, in short, learned to read. I was the blind man in the Gospel whose eyes had been healed. I was, even, Lazarus. 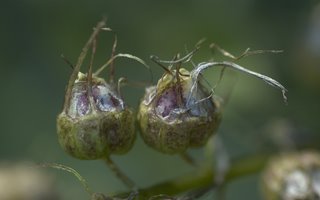 There was, after all, nothing new under the sun. The apostle James, writing to CEOs of multinational corporations, says:

Come now, you rich, weep and wail over your impending miseries.Your wealth has rotted away, your clothes have become moth-eaten,your gold and silver have corroded, and that corrosion will be a testimony against you; it will devour your flesh like a fire. Behold, the wages you withheld from the workers who harvested your fields are crying aloud, and the cries of the harvesters have reached the ears of the Lord of hosts. 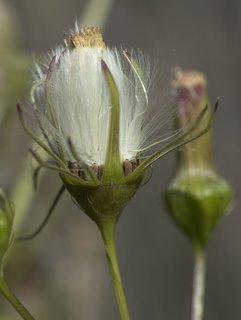 The powerful, through hate and fear, still murder to preserve their power. Still use the facade of religion as a prop, as an accessory to power. Still lay up heaps and heaps of riches, delegating the smallest crumbs to the poor and powerless. 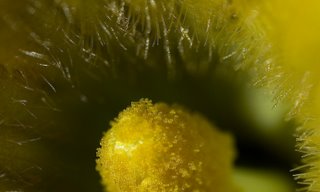 Christ is the counterweight. Christ is the Word that utters God and the Word that God utters, the Mystery of Mysteries, the Holy Ground of Being. The scandalously particular Word -- that one Man, in that desert place at that point in history -- that echoes, compassionately, our own scandalous particularity, our own thrownness into this body at this place at this point in time. In the Eucharist, in communion we become part of the Body of Christ. We participate in the unfathomable Mystery of Being, we participate in God. 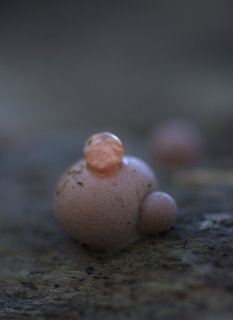 A fragment of Wallace Stevens arose, antiphonal to Hopkins:

The poem of the mind in the act of finding
What will suffice. 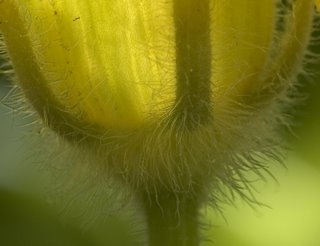 As the sound of the jet faded, I turned back toward the meadow -- sunnier now, almost warm -- and headed toward the woods. It was autumn, winter was approaching, but things were still emerging, opening into the receding sun. 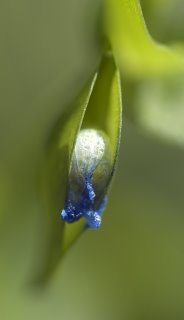 It was late, but, I hoped, not too late. 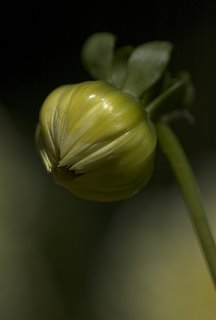 Posted by Paula at Saturday, September 30, 2006 No comments:

Let it not be said that DK and I are not an artsy couple. Let it not be said that we are a pair of frumpy stay-at-homes who never venture forth beyond the safe bounds of our local citadel of culture, Waltham, Massachusetts (mentioned, I bet you didn't know, in the works of Nobel laureate J.M.Coetzee). We are artsy and we are well traveled, and I offer as proof this record of our recent trip to Williamstown -- about as far west as one can go and still remain within the cosseting arms of our blue momma, Massachusetts. (We will not speak of our nonWittgensteinianly unspeakable red daddy Mitt.)

It began, as such things do, one morning over breakfast.

"Damn," exclaimed DK, rattling the arts section of the Boston Globe. "We have to go see this !"

"What," I growled, barely caffeinated. I was trying to concentrate on the latest unsavory antics of the powers and principalities.

"Some dude's built a replica of Beijing out of pots and pans !"

"Say what ?" That got my attention.

"Beijing. Out of pots and pans. We HAVE to go see it. It's at Williams College."

He was, of course, correct. If there ever was a must see, this was it.

So, a few weeks later, we piled into the Corolla, popped Bartok into the CD player, and headed West along Route 2. DK drove, I rode snapshot, my Nikon ready for the untamed landscapes of our state's wild aesthetic west.

A few miles past the watchtowers of Concord State Prison, we drove through Acton, the hometown of Massachusetts' poet-laureate-at-large, Shameless O'Clawson. After a few more outposts of civilization -- viz. this lively roadside symposium --

and purveyors of fine Massachusettserie.

Inevitably, our thoughts turned to lunch. Around a leafy bend in the road we spotted

what appeared to be a restaurant-and-hippopotamatorium. In addition to neon hippos, there were wall hippos

And, oddly enough, there were veggie burgers, bepob, and photos of weeds on the walls, so we were most content. But we could not linger in this most pleasant eatery. We had miles to go. Who'd have thought little Massachusetts was so big ?

Had we taken a wrong turn ?

We executed a hairpin correction

and soon saw North Adams nestled in a scenic vista of cloud, valley and hill. North Adams is the home of the new Museum of Contemporary Art, a fine museum indeed, but we were headed straight through to Williamstown, and the Williams College museum. We were in an artly paradise. So much art, so little time !

and my camera scanned the landscape for images.

Bring it on, I thought, walking the ice-cream-parlor lined streets of Williamstown,

bring on the art ! We shouldered through the crowds of newly-arrived students and graying parents

toward the museum, toward a kitchenware and cutlery Beijing, honing our eyes on accidents

until finally we arrived at Zhan Wang's installation, Urban Landscape Beijing, gleaming under bright floodlights in a small, beige alcove.

This was, of course, also "representational." This was not just any city, it was Beijing, a replica of a real place, not in watercolor or oil, but in stainless steel silverware and cookpots.

We stared at the gleaming kitchenware.

"Take off your glasses," I whispered. "It looks better. Or at least more like a city."

"Yeah," DK agreed, staring into the blur. I put my glasses back on and approached.

The city disappeared, and a demotic display of restaurant supplies appeared.

I backed up and squinted: there were streets, towers, mountains. A palace. High rises. We consulted the key. There, apparantly, was Tieneman Square. I zoomed in again.

Chafing dishes. Cheese graters. Salt and Pepper shakers, none in the form of hippos,

Was there a theme to our trip, then ? It was culinary, and it was geographic. Florida that is not Florida. Kitchenware that is not kitchenware. A hippo that's a salt shaker. A salt shaker that's a news kiosk. What if Zhan Wang had used auto parts or surgical instruments or fruit ? What did this have to do with a Taj Mahal sculpted out of butter or a sugar cube Great Pyramid ? Or with the sheer joy of making things out of other things, a joy we all remember from childhood ? Or, for that matter, Maurice Sendak's In The Night Kitchen ? And what did the medium contribute to the meaning, if anything ? Was it a joke about western ignorance, a joke about Chinese food ? Or about all cities as being about consuming, about eating and being eaten ? Violence ? Eucharist ? But there was no food here. Only the means of preparing food. The antecedents of consumption. Or, maybe, the aftermath of the banquet, after all has been scrubbed clean -- the New Jerusalem !

Was there a clue to this whodunit ? Beijing in Williamstown with a Potato Masher ?

My head was spinning. The blinding, stainless steel city gleamed. It was a long drive back. I would have plenty of time to ponder these things.
Posted by Paula at Saturday, September 23, 2006 No comments: