This may look like a fully loaded Christmas tree, but it is in fact an evergreen being choked to death by bittersweet, a pretty but aggressively invasive vine. I don't usually get on a weed's case for doing what it does -- heck, I've even admired Japanese knotweed and swallowwort -- but I can't resist the timely metaphoric value of something green and fresh and natural being obliterated by strangling cheap crimson gaudiness. 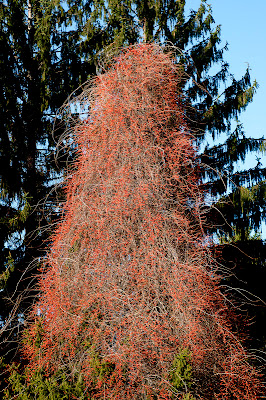 Confiteor: the idea of Advent has been seducing me churchward. I love the dark, cold, Christless, time-beforedness of it all; I love it so much that the nativity always seems anti-climactic. The religious part of my rat-brain has been busily re-examining and retrofitting the metaphors to see if, after all, they might actually suffice in a way that's not reeking too much of mauvais foi.

So I crept into the back pew of a local RCC a few weeks ago, the Church of the Darth Vader Helmet, AKA the Holy Armadillo, and the first thing I heard was a woman yammering on at the microphone -- in an unpleasant, stern and schoolmarmish Boston accent -- about spaghetti sauce, and the upcoming meat raffle. My vegan sensibilities fell into a deep swoon, only to recover and hear the choir launch into a syncopated tune, more sit-com theme song than hymn. 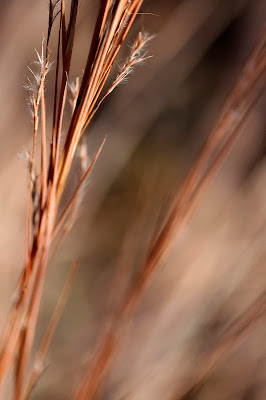 So, even before the priest had processed half-way down the nave,  I fled.

It was Providence, I decided. A message from Beyond -- like an anvil dropped on my head -- telling me to run for my life.

Unteachable, I tried again the next week, elsewhere, still Catholic. Same modus operandi -- back pew, anonymous, wary. This time there were baptisms rather than a meat raffle, and the joint was thronged, loud, convivial, the rumble of conversations and crying babies audible through the whole Mass.

The first hymn was, inauspiciously, "Gather Us In," by Marty Haugen, a Lutheran hymn writer  with whom Catholics seem queerly and inordinately smitten. Back in my churched days our little Piskie choir had dipped into "Gather," the Catholic hymnal, so I have first hand experience with the Haugenian oeuvre and I was not happy to re-encounter it in its native element.

"Gather Us In" sounds like a tune from a bad Riverdance clone, and, later, when the choir broke into the ubiquitous and loathsome  "On Eagles' Wings," I realized that  providential anvils were raining down on my head. After the interminable Eucharist (to which I was, of course, most unwelcome) I skulked off.

The message was slowly sinking in. 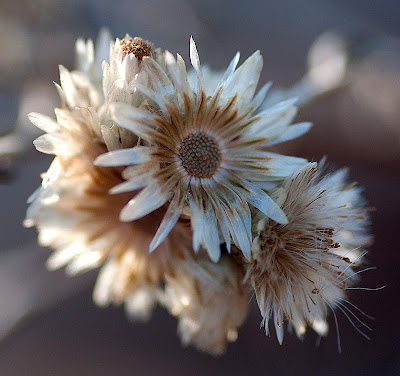 As the week went on, Providence, in whom I have never really believed, kept lobbing its heavy ordnance at my incredibly thick skull.

First, the Vatican defrocked Father Bourgeois, a priest whose very Jesusy, career-long witness for justice included doing jail time for protesting the US torture academy, School of the Americas. His crime ? Attending a woman's ordination.

And Boston's Cardinal Law not only got to keep his frock after covering up priestly rape for years, he got a fancy Roman basilica to go along with it ! 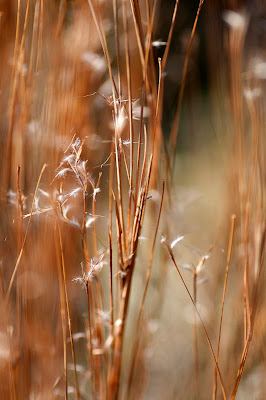 Then, not to be out-done, the Church of England decided that women are simply not Bishop material. +++ Rowan had the gall to say to English churchwomen, "this is still your church," which I found reminiscent of what the new ABC elect, +++Justin,  appended to his own quarrel with gay marriage --

Above all in the church we need to create safe spaces for these issues to be discussed honestly and in love.

Disambiguation: A safe place in which to discuss how much we think you (= all but heterosexual men) suck. 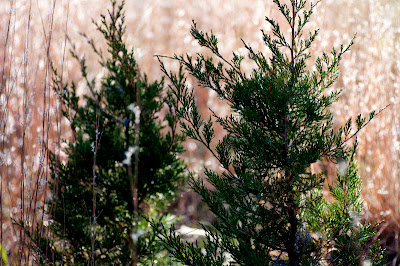 Yes, yes, I know. I am being extreme and uncharitable. But there have been too many anvils this week, and it's finally sunk in:  I have been barking up the wrong, bittersweet-choked tree. Ironic that Providence should be the occasion of my utter rejection of Providence, that messages seem to be flooding me from a Beyond that does not exist. 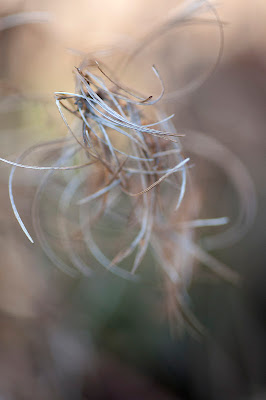 See, the thing is this. I realized it today. Among all its other aesthetically congenial attributes, Advent has served me as armor against the most catastrophic, heartsickening excesses of secular Christmas. The thick stone walls of our pretty little church helped me keep the howling riot of buying and selling at bay. But now, outside the walls, I am in the line of fire of worse ordnance than Providence could ever imagine. I am on my own. In the woods. With brittle weeds and choking bittersweet, stripped of the old story, the old maps, left with deepening night and deepening cold and, over the hill,  the raging din and pulsating lights of the ravenous, secular city. 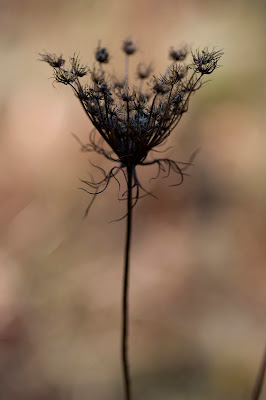 But, after all, why would I need to hang a Church Year on the natural year ? Hasn't Advent's main appeal (at least to me) always been it's co-incidence with oncoming winter ? Hasn't the baby in the manger just been a pretty footnote, an ornament, a fleeting leitmotif ? It's autumn and winter that I love, with a truly pagan affection. It's a love that admits -- even welcomes -- colored lights in the darkness, boughs of holly, wassail, nostalgia, stories, even the notion that the most mere and powerless of beings, an indigent infant in a pile of straw, embodies the impossible strange valor we call "divine." 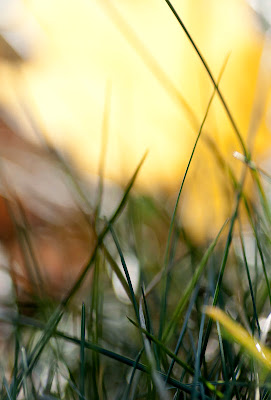 So, once again, I resume my place in the outer darkness. The anvils have stopped, and I have muttered an atavistic prayer of thanksgiving for the goose egg on my head. I will, in all likelihood, require future fusillades of them, and I'm sure the Church, in its bottomless wisdom, will be forthcoming. 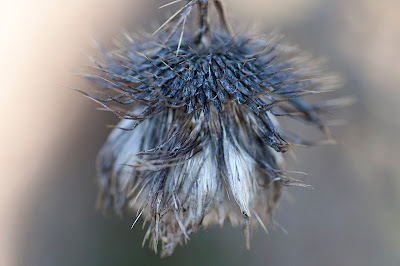 But, for the time being, the hermit of the meadow has rejoined her weeds, bittersweet and all. 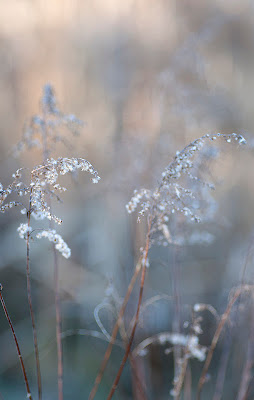 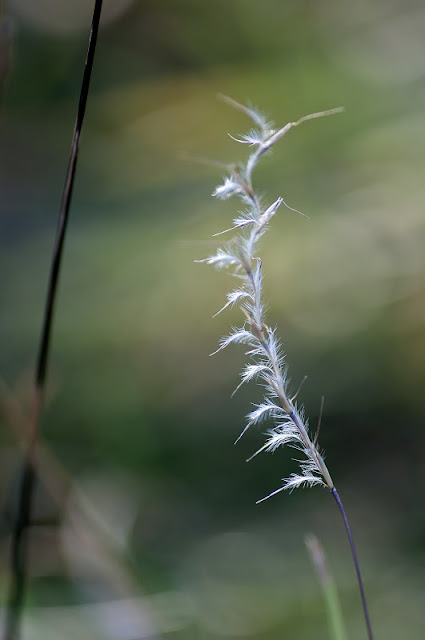 It's fall, but in the meadow things are rising; a great levity responds to the great gravity.

Things tend toward weightlessness. Dry, stiff, hollow, they bend with the wind and clatter against one another -- not for warmth, for that is no longer possible, but in song 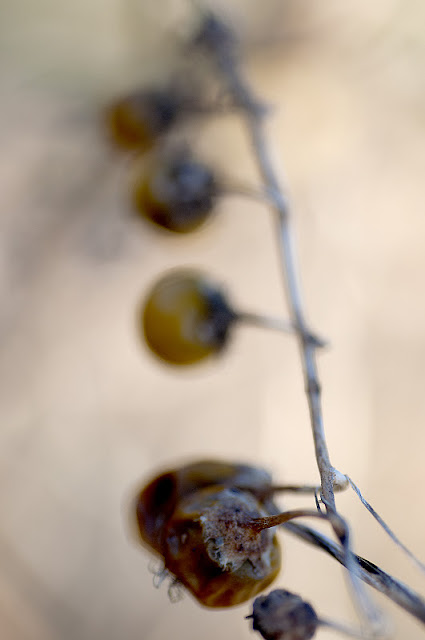 The heart, bled, opens its chambers to ghosts -- disembodied beings who pass through the world unmarked,  elusive as wandering hermits. 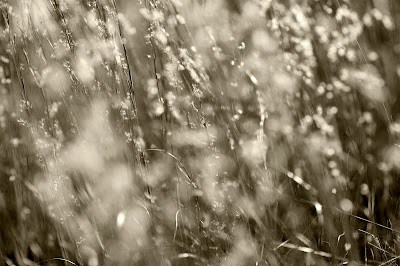 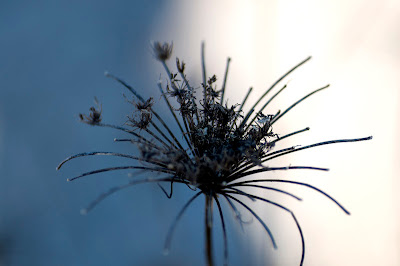 To say that we are anything but homely is a lie. A meal, a hearth, a bed; a book, a lamp, a fond companion. The family cat. Dread and comfort. Unknowing. Gratitude. Despair. This street address, this planet. This galaxy. This universe. These lares and penates. This outer darkness. 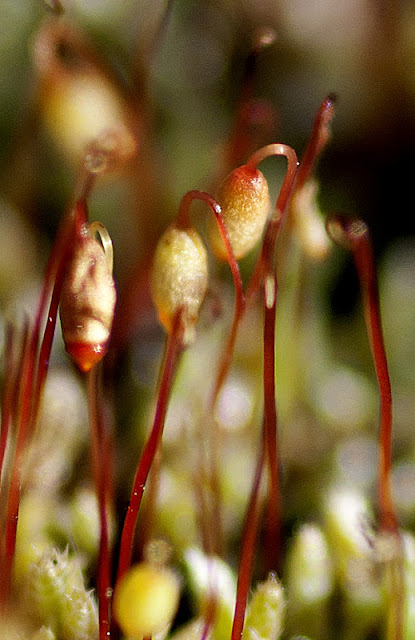 And, homely, we adorn our cave walls with our homely thoughts: equations, aphorisms, creeds, histories, algorithms, fictions and musics, myths and laws. 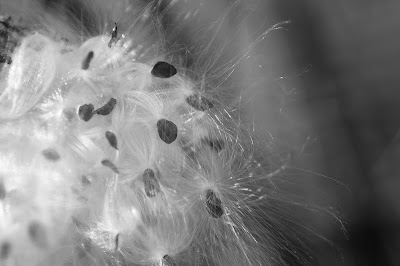 And, meanwhile, milkweed pods do what, in a poem in 1978, I called unsoul in brightness. That's what they seem to do, I suppose. I can't recall what notion I had back then of soul, likely something inchoate and sentimental. Today, in the meadow, they reminded me more thin, colorless, wispy hair stuck through with burdock and cockleburs. 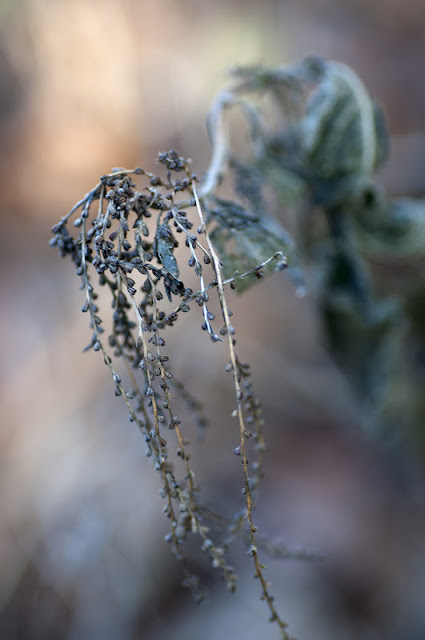 Not everything rises, though. And that which rises eventually falls. Inbreath, outbreath, systole, diastole, day, night, summer, winter, life, death -- somewhere, behind this big organ, a choirboy works the bellows and the ranks of pipes sound. And wheeze, and choke and sigh and sound again. 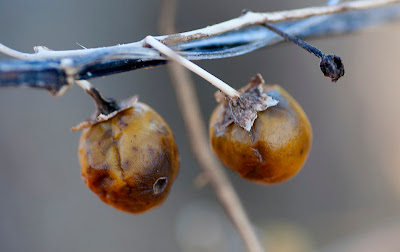 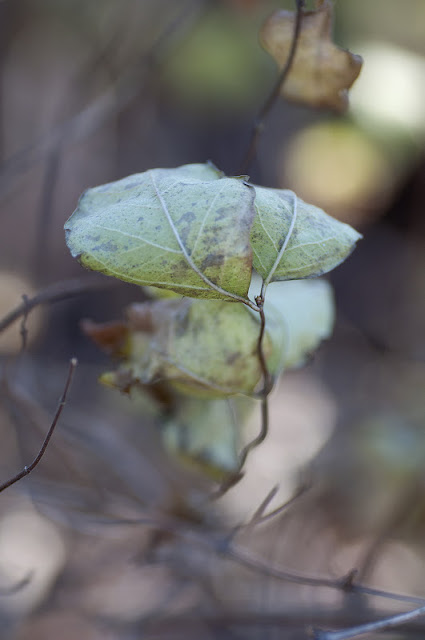