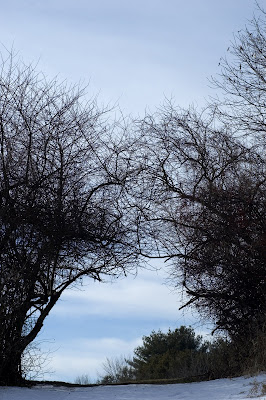 It was my first time in the woods in weeks. The day was calm, almost mild, and bright. Pretty good photography weather, even though the snow would make exposures tricky. A few clouds had congealed over the west horizon. The recent piles of snow had shrunk, but the world was still mostly white and, as I expected, the parking lot at Drumlin Farm was nearly empty. A young couple was extracting a stroller and a bundled-up infant from an SUV. I growled under my breath and plunged down the trail behind the visitor's center as if I were fleeing -- no, there was no as if about it. I was fleeing. Fleeing everything and everyone. It was as if the world had become one big hellhound that was ravenous and hot on my trail. 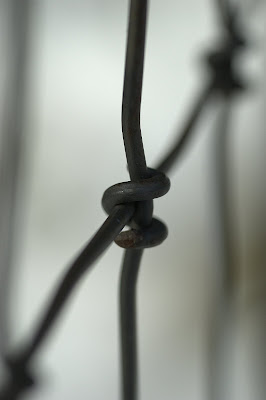 This was not an unfamiliar mindset, this high noli me tangere mode. I caught myself using the word unmolested. This was not just a positive movement toward and into solitude, it was a pushing away, a rejection of anyone and anything that could have any claim whatsoever on me. Why, I was even growling at strangers ! 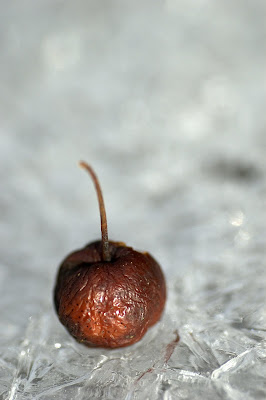 As we drove to Christmas Eve dinner the other day we listened to a Barbara Streisand album. We had brought along our traditional driving-to-Methuen Christmas piece, Messaien's Vingt Regards Sur L'Enfant Jesus, but DK, in charge of music, wanted to start with Barbara. I hadn't listened to her since high school -- and there it all was, her lovely expressive voice, the gooey, overwrought and schlocky arrangements, crescendoing strings and insane harp arpeggios. And there, of course, was her famous tune, "People."

Are the luckiest people in the world.

Now what in the world does that mean. "People who need people." Does it mean those people who are always creepily announcing that they are a "people person" ? Or just your average gregarious guy staggering around with a cellphone glued to his ear because he can't stand being alone for a second ? Doesn't "people who need people" describe just about everybody ? It doesn't make sense -- unless the song is somehow alluding to the UN - lucky people who don't "need people" -- but they could well consider themselves the lucky ones ! Except when the world chucks armloads of yammering people persons at them.

I glowered. We zipped past the Mall. It was in the last throes of the feeding frenzy that, once again, I had managed to completely avoid; we zipped past my favorite two high tech companies, so fortuitously juxtaposed -- Oracle and SAP -- and I had the fleeting thought that they were they offering a commentary on my spiritual life. No doubt about it, I was channeling Ted Kaczynski. And not in a good way. 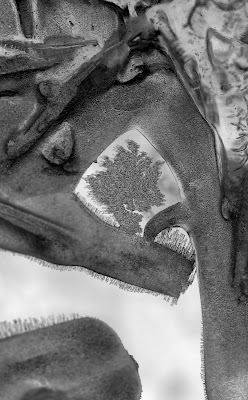 So it was with enormous relief that I found myself alone in the woods with my camera. For the first few minutes I found myself glancing over my shoulder, just to make sure I was truly alone. Finally, I relaxed. As I walked, and looked around me, I felt my head clearing. The path was snow-covered, but easily negotiable. For the first time in weeks the snarky little narrator in my head shut up. Dropped to the floor of my brainpan out of sheer exhaustion, no doubt. 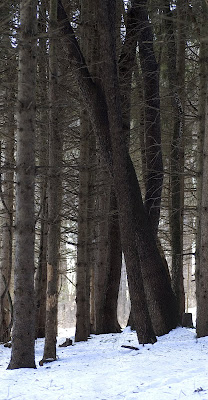 I thought of Simone Weil's observation -- that the imagination continuously fills up all the fissures through which grace might otherwise pass. All that head chatter, good and bad but mostly bad, dissolved in the simple act of looking. Silence flooded in, followed by the thought that my camera would fail -- the autofocus had been acting strangely hinky of late -- and my eyes themselves would also inevitably fail, but those thoughts dissipated like breath in the cold air. All was well, and all, even failing, would be well. 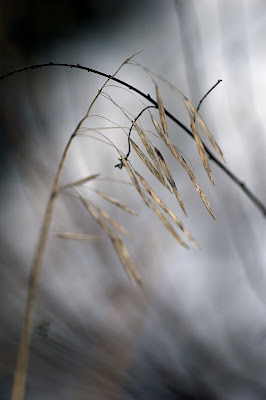 Beyond the bird sanctuary walls, I could feel my life untransmogrify. I stood in the snow, brittle as a winter weed. The wind rose; I rattled. Could I have finally learned how to pray ? As in Lord, open thou my lips, and my mouth shall show forth thy praise ? 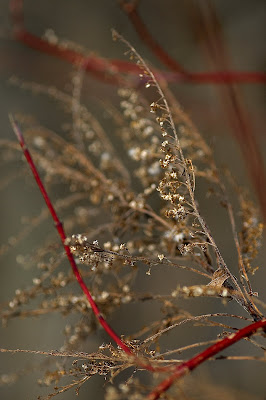 A phrase from last week's Tuesday Eucharist, a reading from Thomas Merton, had nearly knocked me out of my chair: God's infinitely disinterested love. When everything quiets down, that's what's left: the disinterested gaze that does not lead to grasping or pushing away, the gaze that transcends need, the gaze that is pure letting be, and pure adoration. 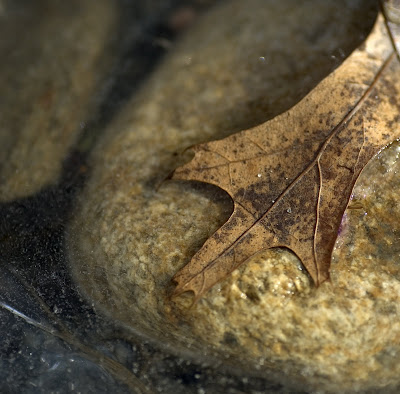 I am I thought the luckiest person in the world.
Posted by Paula at Friday, December 26, 2008