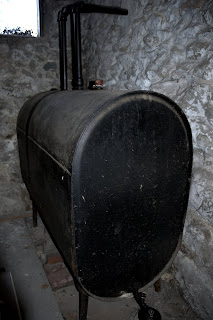 When we bought our big, old house 11 years ago the heating system was not its selling point. The first floor had baseboard forced hot water heat, with a 70's era gas boiler. The second floor had steam heat through old iron radiators via a truly ancient oil boiler. The finished basement which had been a questionably legal apartment and would be DK's studio, and the finished attic where my son would live had electrical heat. Even though we ran baseboard heat into the basement when we moved in, suffice it to say our carbon footprint and utility bills have been Sasquatch-sized. After the gas boiler technician, at this year's tune-up, pointed out a crucial and expensive valve thingy that could crump "tomorrow or in 10 years," my provident, methodical husband began extensive researches into what could be done to simplify our patchwork of heat delivering machines. He obtained an array of proposals and estimates ranging from some device that would live in the attic crawl space and blow hot air downwards into the house, to obtaining a gas boiler that could simply heat everything and that would replace (with some major repiping) the oil-fueled steam radiators on the second, and even ascend into the attic. 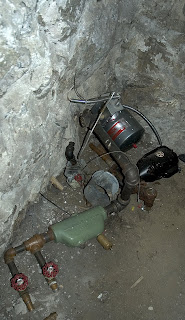 A few months ago, just as it began to get cold, as if on cue, the gas boiler died. As the ancient oil burner chugged on merrily beside it, seemingly immortal, it sat there silently, sullenly even, water trickling from an enigmatic little downspout. It was a Sunday night, and cold. We stood staring at the silent, dripping machine. What should we do beyond putting a pan beneath the drip ? As DK sat on interminable hold with the gas company trying to make sure we were not going to blow up, burn up or flood out -- was there some knob we should or should not be turning ? -- I did what any reasonable person would do, I went on the Google. 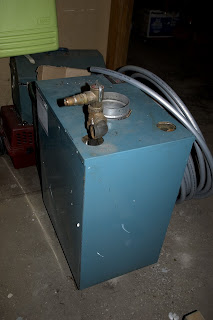 In no time I found reams of stuff about backflow valves and downspouts and overflow tanks. There was this little lever, see, that if you lifted it, might just clear up a sludgy block and get things moving again. Yes, there was such a lever. I'd seen it ! Right atop the suspect valve thingy, infact. I was on to something here. Armed with this information, I returned to the back cellar, located the lever, and, gingerly at first, then with conviction, lifted it.

A raging torrent of blackish water instantly replaced the downspout's feeble trickle. I smashed the lever down. What had I done ? The flow went from raging torrent to torrent. Uh oh.

"DK !!" I screamed, having no choice but to face the husbandly music with my hubris-fueled DIY disaster. He assessed the situation, threw caution to the wind, and turned a knob on an overhead pipe that seemed to lead in the general direction of the spewing boiler. The torrent slowed and stopped. I heaved a sigh of relief. DK, loving husband that he is, did not say

What on earth were you thinking, woman ????

So fast forward to our current construction. DK obtained a great price for redoing the whole thing, bottom up: one gas boiler, baseboard heat on all floors, removal of all the old pipes and boilers and radiators and tanks. OK, we said. We'll do it. It wasn't going to be cheap, but there was some inherited money we could use.

Although the whole project has taken hilariously longer than the contractor had promised, I must say the first phase -- restoring heat to the heatless first floor -- went swiftly. Within a day or two of signing the contract, the machine called Buderus had taken up residence in our basement. The crew did a careful, exacting, magnificent job. 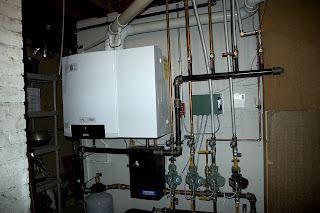 Buderus is beautiful. There is no other word for it. Breathtakingly beautiful, practically sculptural. Wallmounted, practically silent, monstrously efficient and glistening white as a kitchen appliance, it radiates a serene haughtiness. It is practically cool to the touch. Not like the roaring oil boiler that radiates waves of heat. It is exquisite, sophisticated. A work of art. I expected it to address me in the soothing tones of 2001's Hal. 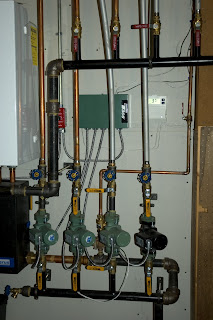 DK summed it up. "Our new boiler has algorithms in it," he said, in a tone of mild, ironic wonder. Beside it the old oil boiler roared away. I watched the flames dancing through the chinks in its door. I gazed with pre-emptive nostalgia at the little glass tube with the water level that I'd had to maintain at the half way mark, and at the red reset button that would summon back the flames if I let the level fall too low. And I would miss the banging of steam in the pipes and the cozy whistly hiss that signaled the heat was coming on. 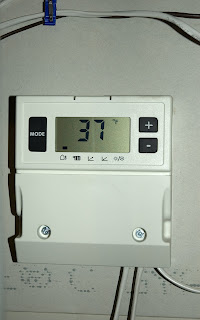 After many weeks, and not a little impatience on our part, the attic came on line. And this past week -- after another long delay -- the crew tackled the second floor, boring through ceilings, running pipes and baseboard elements. And I must say, although we grumbled mightily at bizarrely numerous promised arrivals of the work crew that never materialized, we have never been without heat. And all the delays have allowed us to use up the full tank of oil we had at the outset of this process.

It's been disruptive -- less than I'd feared -- but it's taken the biggest toll on Sami, our most neurasthenic kitty. She's had a rough time lately. Just before Thanksgiving she disappeared. An inside kitty, we knew she was somewhere in the house. After a day of searching, we found her wedged behind a bookcase. When we extracted her, we noticed there was something amiss with her gait -- the hindquarters seemed a little wobbly, ataxic -- not frankly weak, as she could still rise up on her back legs, but not quite right. I poked and prodded at her legs and she didn't seem to be in pain. We isolated her in a room with litterbox and food and determined that she was eating and drinking, then hauled her to the vet. The diagnosis was, "Gosh, we don't know !" Blood work and one of those creepy full cat xrays they do were normal. Perhaps we could taker her to an internist or a neurologist ? In the meantime, give her some appetite stimulants ! Well, we did give her a few doses of Remeron, she hoovered up many bowls of catfood, and slowly, over a few weeks her behavior and gait improved. 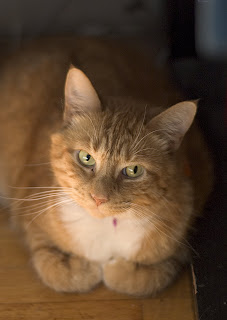 Then the construction crews came. Two days ago, after a day of major Buderus-related activity, we realized we hadn't seen Sami for hours and hours. Could she have gotten out ? It was unlikely, although not impossible, that she, freaked out by the commotion, had darted out an opened door. We scoured the house top to bottom multiple times. As night fell, we began to worry. Really worry. Where could the kitty be ? We stood on the back porch calling into the darkness. I looked under the cars, I looked in the garage. We swept through the house again, searching all the know cat cubbies and hiding spots. No Sami.

Then we heard it. The meow. The faint meow. The faint plaintive meow. We heard it in DK's studio, in the finished part of the basement next to the unfinshed boiler room. It was definately not from outside. My heart sank. We went through the flimsy louvered doors into the unfinished cellar. We quickly looked around. No Sami. Buderus purred coyly, almost inaudibly, on the wall as if it knew and was not telling.

Around the corner from Buderus there is an unsavory little cul de sac that contains the basement toilet's "ejector pump," the occasion of a grotesque homeowner's disaster of two years ago. It rises up out of a round steel plate that covers a cistern of Edgar Allen Poe caliber eaux mortes. How deep ? Waist deep, I was told, but I don't believe it for a minute. Infinite, I suspect. It is the stuff of nightmares. 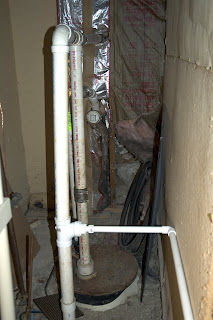 Beyond the plate and pump is a space where, I vaguely recalled, a kitty of yore had gotten into some mischief. I squeezed into the cold, narrow slot with a flashlight, and pulled back a curtain of fiberglass. 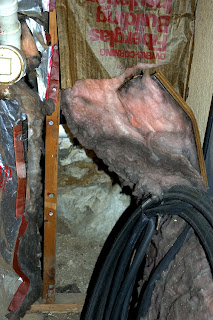 There was a space behind it. I gingerly lowered myself to my hands and knees and stuck my head into the cold, dusty space. I trained the light to the right, and there she was about six feet away, in the immensely long, lightless tunnel between the foundation and the basement's inner wall. "Here Kitty," I called, which prompted her to scurry farther away into the seemingly endless tunnel of darkness. 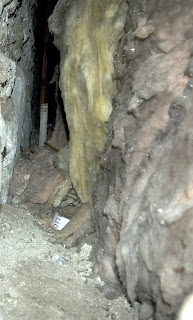 There followed much hand wringing, much listening to plaintive meows through DK's studio wall, some futile thumping on said wall in an attempt to scare the kitty out. No avail.

She would probably come out, we reasoned. When she was ready. DK rigged up a light and trained it on the opening in the wall. I did what any reasonble person in our position would do, I went on the Google.

A search on cat in wall resulted in 30,800,000 hits, and "cat in the wall" 67,200. We were, apparantly, not alone. Two common themes seemed to be "it will come out when it's ready" and "tuna fish." There were, of course, the horror stories of walls needing to be torn down, and skeletal survivor kitties emerging after months of incarceration. But I would not dwell on these, no. Instead, I opened a can of tuna fish. We placed it at the opening, and I went upstairs to read. In about 20 minutes DK called me.

The tuna was gone. The kitty ? Back in the tunnel, plaintively meowing.

Well, at least we knew she was sort of indoors, appetite intact, and could come out if she wanted to. It was cold in the tunnel, but not as cold as outside, and she had on her fur coat. We'd slop down more tuna and go to bed, making sure to keep the four other beasts upstairs. I didn't like the thought of our sweet little Sami alone in the dark, but she had her own cat agendas to work out, and there was no way that I was going to try to wiggle into that skanky little tunnel, yet, anyway. Have you ever Googled "wife in wall" ? Only eight hits. I rest my case.

As I tried to fall asleep, I struggled to keep my mind out of Poe territory -- tell-tale meows, cries of For the love of God, Meowtresor !

In the middle of the night I heard DK get up. I knew where he was going. After a bit he climbed back into bed.

"Yup. I opened the door to the basement and she bolted up into the kitchen !"

The Google had redeemed itself.
Posted by Paula at Sunday, January 04, 2009

Cheaper means again and again pain. Costly means permanently saved from headache. Tune-Ups are really necessary for your HVAC system as its being running without any break. The article evaluate tune-ups prices so nicely. Heating and Cooling York